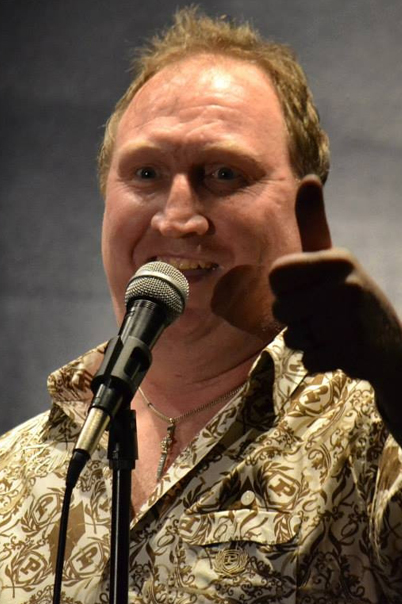 Keith Godwin has seen it all, done it all, and lived to tell the tale. Now he wants to do his best to prevent people from making the same mistakes he made, and to help them recover from mistakes they made on their own. Keith joined the Marines in 1986 and turned alcohol and cocaine into his passion. Four years later he was a security guard for the stars, protecting some of the best known celebrities, athletes and politicians. He kept partying like a rock star, however, until he had celebrated his way into full-fledged addiction. He went into treatment to kick the drugs, but intended to keep alcohol in his life. It didn’t work. It took losing an arm and being stabbed just inches from his heart to give him the wake up call he needed. This time, he went into treatment with his eyes and mind wide open, and he has been clean and sober for 16 years. He never would have made it without the healing power of comedy. People say that laughter is the best medicine and Keith can definitely vouch for that. He started performing stand up in 2007 as a means of therapy and sharing his story with the world. He credits humor and laughter as the main reasons he has been able to stay off drugs and alcohol. Laughing at your pain won’t make it go away, but it makes it easier to manage. Read More

Laughter and recovery turned Keith’s life around, and he made it his goal to help others in need. He is both a comedian and a motivational speaker, and he started recoverycomic.com to help people heal one laugh at a time. He brings sober and recovering comedians together with audiences that need to hear their hilarious stories most. He performs at AA, CA and NA conventions, rehab facilities, jails, halfway houses, colleges, fundraisers,12 step programs and anywhere else people can use a friend to help them through the hard times. As a veteran, he also performs at VFWs and military events. Keith is more than just a recovering addict, however. He is a talented and versatile comedian, with the ability to perform shows with content ranging from church clean to adult. He co-founded comedytogoinc.com which does fundraising for firehouses, sporting teams, schools, churches and any other organizations looking to raise money. He gives back whenever he can and never misses an opportunity to bring a smile to a stranger’s face. Keith has toured the United States with his powerful and hilarious message of recovery and healing. He has worked with comedy greats Gilbert Gottfried, Rich Voss, Jessica Kirson, Mike DeStefano and Chris Roach. He has been profiled in Newsday and has been interviewed in print and on radio all across the nation. Being a recovery comic isn’t a gimmick. He is a licensed CASAC (Certified Alcohol Substance Abuse Counselor) and his day job is helping veterans with addictions and other issues. He teaches humor therapy and belongs to the AATH (Applied Association for Therapeutic Humor). Keith Godwin may be a comedian, but his commitment to helping others in need is no joke.

Some of the comics we have worked with.

Some of the comics we have worked with.